The weekend after the outing of my last post, and after a very expensive morning shopping (one bike, a coffee machine and a new phone) we headed back down to Kent for a warm up cycle - and Sean's first road outing. Fittingly, as you'll discover, it rained. We remained undaunted. He thoroughly looked the part, turned out to have not just super strong running legs but super strong cycling ones too, and only fell off once… 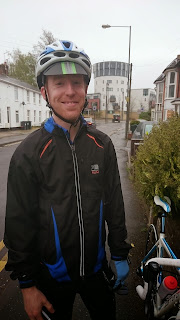 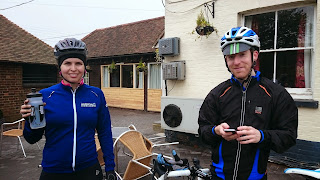 Practice run completed we came back the next weekend too (again, after an expensive morning courtesy of the female-specific cycle shop Bella Velo…) for the big ride. We were set to do the 45mile loop of the Pilgrims Hospices Cycle Challenge, starting in Ashford and going out to Canterbury and back. The weather wasn't kind. In the short while it took us to get from the sister's house to the hospice in Ashford it felt like we'd been riding within our own personal showers. There we registered our bikes, had a couple of team photos taken by my parents and felt a bit as though we'd wandered into a whole different world. Much like when I started running and went to my first race, I felt painfully out of place. The area was dominated by men on speedy looking bikes. But feeling at least I'd figured out that such thoughts were unfounded in the running world I tried to shrug them off. After all, they were getting just as soaking wet as we were…

We set off as pairs; the boys riding together at their naturally quicker pace, and me and my sister just trying to enjoy the experience. One (apparently sign posted) wrong turn took us up a brutal hill, which made me rather concerned about the promised 'categorised climb' on the way back. (I needn't have worried - our detour actually took us up a steeper hill, so we were well prepare). The torrential rain continued pretty much the entire way to Canterbury, our halfway point, where it eased off for us to eat some of the amazing food provided by the volunteers. Unfortunately being soaked through meant we got cold quickly, and the boys soon headed off.

The return leg was blessedly dry, but hilly. I found all the spin training paying off, and even started to hear the 'hill songs' once the legs started pushing. To be honest I found it all thoroughly enjoyable and quite inspiring to look forward to future bike training for the triathlon. Plenty of time to think on the quiet back roads and I found myself wondering if maybe I'd stumbled into a sport to fill my days with. I'm very excited about where my triathlon journey may take me...

Not having a sports watch or Strava running we didn't really know how near to the finish we were. A road sign stating "Ashford 4miles" gave Kate a second wind, but suddenly finding ourselves back on the road towards the hospice came as a bit of a shock. With elated whoops we free-wheeled down the hill and turned into the hospice, to be greeted by the boys, more food, some sunshine, and a medal. 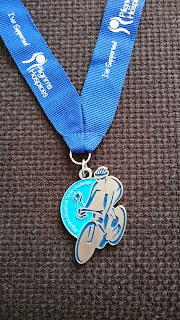 My first cycling medal gives me much of the same feelings as getting my first running medal did. Excitement and pride. While I'm sure there will be more, nothing is quite the same as the first. Being a charity ride there were no times recorded but the boys think it probably took them about 3:30. I've no idea and don't care how long it took me and my sister, all that matters to me is that I enjoyed it so much even in the rain/cold.


There has been some running still. Bushy parkrun now runs on a new (and possibly better) course. We'd still been doing parkrun on Saturday mornings before heading down to Kent for the bikes. The morning before the big ride I volunteered, but the lovely fiancé ran since it was his 100th run at Bushy. Volunteering meant I got to try my hand at barcode scanning, and seeing the new wide start in action. Verdict on scanning; awesome. The first barcode I ever scanned was that week's winner. From then on it was head down, cheerful 'good mornings' and suddenly 50 minutes had passed. It was brilliant. 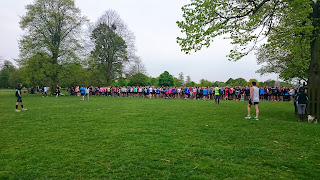 Finally, this weekend was spent (with no bikes involved) at the parents' house in Spain for Mum's birthday. The whole family was there; all 3 of us sisters plus boyfriends. The sun shone, the pool was warm and life was good. We even squeezed in a little run on Sunday morning. My first run with Kate was a short tempo run. It felt really great to be in a coaching role - I was able to put into perspective just how far I've come with my running. And it was lovely to be able to pass on some of that hard earned knowledge. 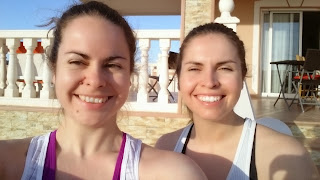 Signing up to the triathlon and starting to do some training as a group has been awesome. I fully plan to harness the boost that training together gives, and we're starting to plan proper little training weekends. Cycling and swimming at theirs in Kent, cycling and running up here in London. It really feels like the start of a very exciting adventure.
Come and see where it takes me!