It's been a good week for training. A brutal session on the turbo saw me too tired to even wave when the lovely fiance walked in mid-way through. A long and plodding long slow run where I was more bothered about going gently and trying to start to build some happy memories along the doomed Richmond route, and a good run/swim session today.
Read more »
Posted by knitandrun at 15:28 1 comment:

Despite the horrible cold weather there are occasional days when it feels like Spring might just be around the corner. After our failed trip to Kew Gardens earlier in the month, the lovely man and I went again, this time on a day when the sun actually shone and the orchids weren't completely rammed with people. It was still absolutely freezing and the orchids were still very busy, but wandered around the quieter, further reaches of the gardens and had a lovely morning.

Read more »
Posted by knitandrun at 12:03 No comments:

I'm trying to be a bit structured with my training this year. I've notoriously always just winged things a bit, very much listening to my body. But now with my snazzy planner in hand I'm able to, well, plan things more. So I'm working on the traditional 4 week cycle - three weeks building in distance, one rest week. And I've just hit the rest week. This week consisted of a hard NTC workout, an insane 90 mins on the turbo trainer, a long (horrible) run on Sunday, and a 2km swim (made up of drills). I'm really feeling it today. Things ache and hurt, and I've woken up with a crick in my neck. Time for a rest before starting all over again.

The (horrible) run was to Kew Gardens. There's something of a curse when it comes to me running along the river to Richmond. A route that is doomed to end in pain and frustration (like the Richmond half marathon last year that saw me have a massive tantrum and then throw up everywhere at the end). I wore the wrong shoes - should've been trail but they give me blisters anything over 10km. I was running with a big rucksack containing my nice camera and change of clothes for the gardens, which weighed me down and made my shoulders ache. And I was still tired from the epic turbo session. I got killer stitches, blisters and couldn't have been more pleased that the route was 3km shorter than anticipated. But I stuck it out and got there in the end. 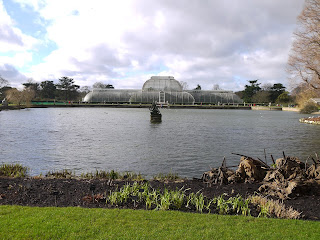 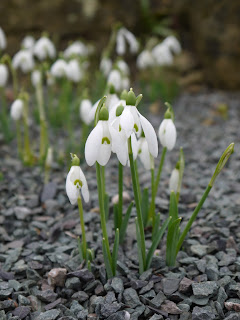 We sat and had breakfast at the hugely inefficient and always quite disappointing Orangery cafe, before heading to see the orchids. We walked in, took one look around at the massive crowds, and went home. I managed to snap this little guy posing in the entrance before we left. 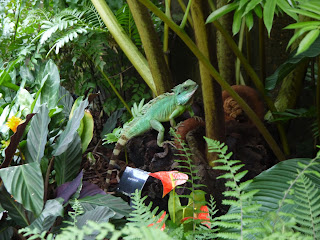 Being members means we were able to write off a bad morning, and come back another day.

We spent the rest of the day sat on the sofa(bed) watching the rugby. 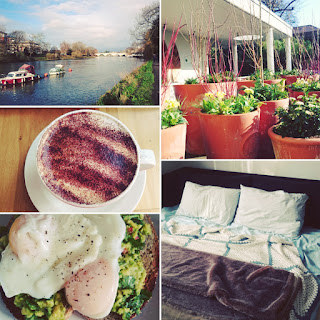 In other news, I've finished one half of my new pair of mittens. This got frogged once after I realised the large was going to be way too large, but I'm pleased with how it's turned out. I looooove the little thumb top! 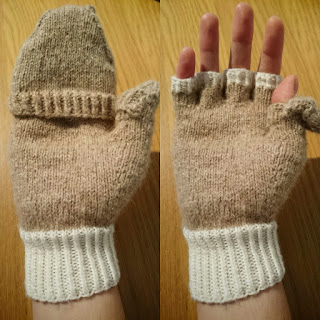 Further sewing plans afoot, and I promise I will write a Linden review, as soon as the light improves enough for me to take some decent pictures!

Posted by knitandrun at 09:19 No comments:

In the past two weeks since I wrote last, a few things have happened. They break down quite nicely into categories. And since this is the 'knit and run' blog, I'll start with some knitting and running...

I finished my 'Some Cloudy Days' legwarmers. These absolutely flew off the needles, a very satisfying and quick knit. I've yet to wear them out properly but from the few times I've tried them on indoors they're very cosy indeed. 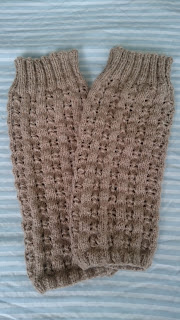 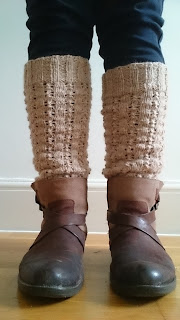 I had originally planned a shawlette/scarf with the remainder of the alpaca stash, but on the one time I've had to pull on my mittens I discovered the dreaded moths had got to them. Only one hole, but a terminal one. So the rest has been earmarked for some podster gloves (already well under way).


On the running front, I've actually been doing some!! I haven't run properly in months and months, and the last run of any distance was probably the ill-fated Richmond Half from Kew Gardens (lesson learnt - don't run a half marathon you haven't trained for after two days of weddings). My little trot down to the gym ( a downhill 3km) had been alarmingly hard work the first time I'd tried it. Fortunately my legs quickly seem to have remembered what running should feel like, and the next week the downhill jog felt a lot more comfortable.

So with the lovely fiance getting into the business end of his marathon training, we both used Sunday morning for our long runs, before crawling back into bed for an afternoon of lazy film watching. I did a tried and tested route - out to Bushy park and back along the river, a nice 12km. For the first time I tried running to heart rate. Not so much a zone, but just keeping a constant number where I felt comfortable. This kept my attention away from worrying about pace too much. A focused 175bpm and I felt surprisingly good. Yes my legs started to ache, and my trail shoes gave me blisters, and my waistband started to chafe but it was so good to feel like I was back doing some positive training.
I felt part of the Sunday Long Run club that I've been away from for so long. And I loved it.
Also turned out to be a not at all shabby 6:05/km pace.

Triathlon. I'm very much trying to keep an equal focus on all disciplines this year. And in time for my birthday my latest weapon in my training arsenal arrived - a turbo trainer. Bargain from sport pursuit, it's got 5 different magnetic resistance settings. I downloaded some encouragement from Chrissie Wellington and had my first home spin session last week - brilliant. Sweated buckets, destroyed my rear tyre, loved it.
Swimming-wise I've upgraded my swimplan account and have started to get back into regular 'workouts'. I'm still committed to putting a tumble turn at the end of each joined up length. Unfortunately my watch really doesn't have much luck at counting lengths (I hate to think how it would do with strokes or SWOLF stuff) and regularly comes out at least 400m short. But still, it all goes on strava.

I've also done some sewing, but I'm so proud of it I'll save it for another post. Clue - it involves my first encounter with knit fabrics....
Posted by knitandrun at 11:28 No comments:

As the late great Terry Pratchett wrote, "Everything starts somewhere...". This very much feels like the start of something. I have a need to mark out the start of 2016 as a proper Beginning.

New Years always bring a feeling of renewal, of starting afresh, of new beginnings and better resolutions. But this year is a little bit different. I (and indeed the lovely fiance too!) started a new job on the first Monday of the year. Mine is very different to where I was. From a clinic in central London where appointments with patients would last hours and courses covered weeks, to rooms in offices in Surrey and Slough where appointments are 30 mins including paperwork time. I'm also working by myself. And for rather long days, up to 12hrs at a time.

This is all rather a big step forwards. The long days mean I spend 3 and a half days at work (unfortunately including Saturdays, so parkrun is lost to me). Giving me plenty of balance with my 'life' days - Mondays and Fridays no less! The lack of time and energy over the latter part of last year to do anything creative/fitness related is related in the neglect of this blog. I'm very hopeful that now that I have so much more 'life' time, I'll be able to do a lot more of the things I love. 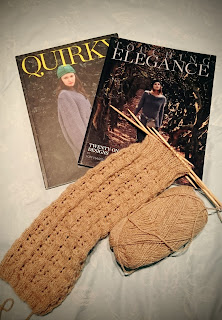 I'm planning a lot of knitting, sewing, crafting, wedding prep, running, swimming, cycling, workouts. I've already started!
I have big goals for the year. There is another marathon to run. Triathlons I want to enter. Things I want to make.

But I'll save the goals for another post. Today I just wanted to place my finger, and say 'here is where the journey began'. I hope you'll come along for the ride
Posted by knitandrun at 10:54 No comments:

Email ThisBlogThis!Share to TwitterShare to FacebookShare to Pinterest
Labels: life 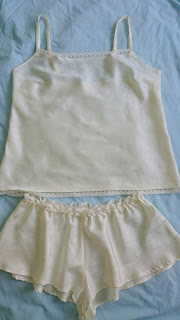 Read more »
Posted by knitandrun at 20:53 No comments:

Read more »
Posted by knitandrun at 17:13 No comments: