Movember is a pretty well established event now. So much so that there are running events created to support Movember....MoRunning! Fortunately women are also welcome (as MoSistas), so last Saturday I found myself in a rather chilly Greenwich Park along with my lovely boyfriend, a collection of his friends, and 2000 other runners. I'd made myself a little moustache, using this pattern, so I was fitting right in; 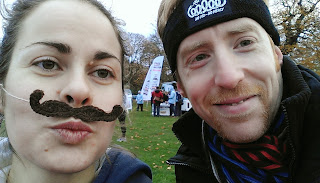 For those that have never been to Greenwich/missed it on the Olympics (highly recommended a trip to the observatory - or even better, a trip at sunrise to watch London wake up), there's one notable thing about the park...it's hilly. Very hilly. I knew this, and was worried.
I'd sprained my ankle 2 weeks before the race and hadn't run since - I'd volunteered at Bushy parkrun (another thing I'd highly recommend). I'd also had a bit of a stomach bug a few days before...safe to say I was pretty nervous about the hills given my rather dismal preparation. Despite the organisers apparently having cut down the number of major hills in the course from last year, there were still 2 big ones to tackle and oh boy were they hard work. I had to walk most of the way up the second one. And having conquered them once, there was another lap to go, so you had to conquer them all over again. Staggering up to the top of the second beast for the second time I knew I only had 1km left to go, but it was the hardest 1km in the world to drag myself around. I finished in 1:01:04. I was exhausted, my legs hurt like hell, but I'd survived. And I'd got a medal… 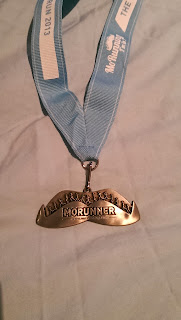 The run was well organised, staffed by some really great marshals and had a great feel to it. But those hills were just too much for me, I think next year I'll give the Battersea Park run a go.
Posted by knitandrun at 17:16