So, on Saturday I took part in my first ever race. It was the BHF Hyde Park Run - and I ran all 10km of it.
I'd entered it because it was the right distance in the right location, and not really because I have any personal ties to the charity. I thought I'd try and raise some money though and put my target as £100. It was mostly family and close friends that sponsored me, but a few unexpected donations really made me feel that actually I was doing something worthwhile. My sister knew I was aiming for under an hour, and challenged me; £20 if I was under, £10 if I was over. This was a great motivator, especially since I'd only managed 1:06 in training. (Top tip 1, do it for charity).

On the day I stressed about being late, about what to do when I got there, about attaching the timing chip to my shoes...pretty much everything. Having my boyfriend there to say reassuring things was wonderful. (Top tip 2, take someone with you for emotional/physical/logistical support).

Once we got started though, I enjoyed it. Yes I really enjoyed running hard and getting sweaty and being stared at by all the bemused tourists, because I was part of this massive group of runners and we were racing for a good cause. I could read peoples dedications to loved ones attached to their T-shirts and it was clear people were doing who didn't run very often. A lot of people walked a lot of it. But there were also a lot of people like me, slogging it out. It made me feel good, it made me feel like a proper runner, and because I was set to hit my target time it made me feel like a winner. (Top tip 3, train well and set yourself a challenging but realistic target). My official time? 59:09. 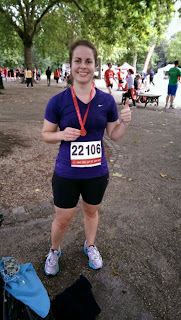 In summary, I ran my first 10km. I raised a load of money for a good cause, I hit my target, I enjoyed it.

So now I've booked a place on my first half marathon. Obviously.
Posted by knitandrun at 17:09