Why do I knit?

I can clearly remember when I decided I wanted to learn to knit. We had a babysitter who lived in the other end of our village, affectionately referred to as 'aunty'. She used to bring her knitting with her when she babysat us, and I was fascinated. After watching closely I - somewhat ambitiously - decided to try it myself the next day, using some string I found and two of the little wooden pointy sticks from our 'pick up sticks' game (remember it? Like this). Obviously I got no further than some tangled string and a frustrated little face. But next time Aunty came around, I asked if she could show me how to knit. My two sisters also decided they wanted in on the fun. She cast on the stitches for us - one for each year of our age, which made me very happy as it meant I had a couple more than my sisters - and off we went.
Throughout my childhood I knitted endless scarves with some pretty crazy 'novelty wool' from the local craft shop. My greatest achievement was this little jumper for my teddy, that I knitted as 2 flat pieces and my mum sewed together for me. 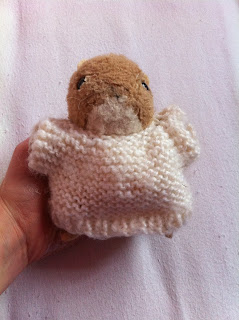 I stuck with scarves until university, when I bought the Stitch 'n Bitch book, which in turn led me to Ravelry and I haven't looked back. Blankets, jumpers, socks, hats, gloves, slippers...endless exciting things.

So, I knit because it was something I started as a little child and enjoyed, so have never stopped. But, here are some grown up reasons to give it a try;

- It's very therapeutic. Somehow it takes up just the right amount of brain. This is one of my main reasons: it is a pleasant way of spending free time (if it wasn't, then regardless of your determination, you probably wouldn't actually want to spend much time knitting).
- It's incredibly satisfying. Making something from nothing but a length of yarn using just your hands is a really great feeling.
- It's all unique. No-one else will be wearing it, or have just unwrapped an identical one.
- It guards against waste. You're pretty unlikely to throw away something you spent hours and hours making just at the first sign of wear. You'll try and fix it. You'll accept that it's looking a bit loved. And if something woolly really has reached the end of its life, you can unravel it and knit it into something else.
- You look extrememly talented. That magical ability to make something from nothing? To those that don't understand it, it makes you look pretty awesome. Even the simplest scarf will get gasps of admiration and "I don't know how you manage it!" comments. And everyone needs a bit of an ego massage occasionally.
- You can give things money can't buy. A handmade item has your time, your hardwork (and possibly your blood, sweat and tears) worked into it. Giving it to someone shows you think they're worth all that, and that's something pretty special.
- It's actually quite a cool thing to do. It's not just for grannies you know (if the Huff Post says it, it must be true. And it's been cool for a while).
- There's something for everyone. Once you can knit and purl, you can make things. Right from the off as a beginner there's things to do. But there's so much to learn and so much to make that you'll NEVER run out of things to do. You'll never know everything, there's always something new.
- You're part of a club. There's so many knitters out there. And they're all lovely and friendly. It's extremely likely there's a little group of them that meets somewhere near you, and are a real mine of inspiration and knowledge. More of a lone ranger? The internet is full of free tutorials and patterns.

Email ThisBlogThis!Share to TwitterShare to FacebookShare to Pinterest
Labels: knitting